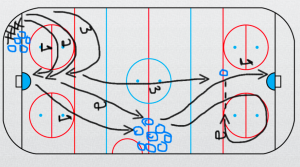 All you need for this drill s full ice, your team (you can do this with the team you’re practicing with too if you don’t have full ice), and rings.  Split everyone into corners diagonally from each other.

After the first person takes a shot on net the skate to the pile of rings on the opposite boards they started on and goes to take a shot on net.  The second person goes and gets a ring from the same pile and skates around the circle and passes the ring to the third person who times skating into the zone.  The first person can play defence while the other two want to get a shot on net.

Alternate people going from each corner for as long as you want to run the drill for.
Here is the drill diagram as a pdf.