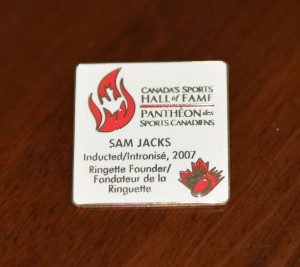 Samuel Perry Jacks invented ringette in 1963 because girls for a long time he saw that females needed a team sport to play on ice. Sam Jacks was born on April 23, 1915 in Glasgow, Scotland. At the time of inventing ringette he was director of parks and recreation in North Bay, Ont.

Sam Jacks had three sons Barry, Bruce, and Brian who all played hockey, but he believed that girls should also have the opportunity to play an ice game. The game was finalized in 1963, and is a game designated to keep people moving and encourage participation.

Jacks always looked to the future and he saw ringette even beyond what it is today and there was never any doubt in his mind that the sport would grow across Canada and the World.