For this past week the photo challenge was Reflecting and while I was taking photos for another blog post I noticed the reflection from one of my medals no matter how I moved my light source, which gave me the idea to show the light reflecting off a medal.

The particular medal that the light is reflecting on is a medal that was won after a pretty tough weekend. We were out in Kelowna for the Sweetheart tournament and I remember getting taken out during just about every game we had- mostly my ribs being hit multiple times despite my shoulder pads. Also that we only had two full lines and our goalie- I was also reffing some games at this tournament. This medal was also the first medal that a team I had been on won after getting the participation medals until the end of being in Bunnies (Active Start). Seeing the light reflecting off this particular medal reminds me of a really great weekend winning a medal with a great team even though it was the Bronze medal it was still a medal we won after a tough weekend. 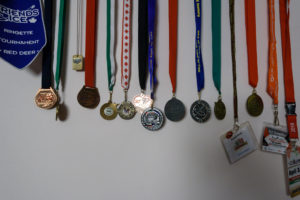