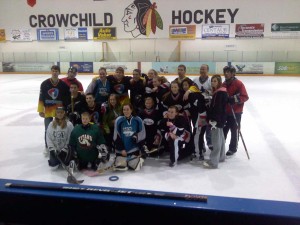 One of the most fun and memorable ringette fun ices I can remember was when four Mac’s Midget Russian hockey players came out to our Christmas fun ice.  I was on Junior B Calgary North Legit at the time.

It was such a fun night even though I wasn’t able to participate.  The fun ice took place on December 22, 2010 at Crowchild Twin Arena here in Calgary.

The part that made the night so memorable was trying to explain the basic rules of ringette.  Watching from the bench was actually pretty fun even though I had only gotten to play one game since I had got cleared to play again after sitting out six weeks due to a fractured rib.

It was such a fun night and it just added to the really fun memories from that season even though I didn’t get to play in as many games as I would’ve liked to.