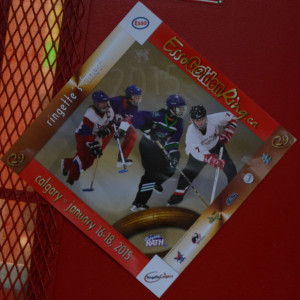 The Esso Golden Ring tournament returns to Calgary hosting the largest ringette tournament in the world. This year there are 365 games played in just three days. There are 105 officials to cover the 365 games that require over 700 assignments to fill.

To run the tournament, there are 600 volunteers hosting 190 teams with 2,607 players. Teams come from British Columbia through Prince Edward Island to participate in the tournament.

Ringette is a sport invented in 1963 by Sam Jacks in North Bay, Ontario and is played by girls. It’s a combination for floor hockey and lacrosse. It’s played on ice just like hockey, has the same equipment, and some of the same rules.

In ringette you have to pass the ring across the blue line, you cannot enter the goalie’s crease, and only three players from each team not including goalies are allowed in the end zone of the rink.

Instead of using a stick with a blade and a puck, ringette uses a straight stick and a rubber ring. There are no off sides in ringette so a team can have one of the players as the “cherry picker” down by the other team’s end of the rink.

“I like seeing players become coaches when they’re young,” said Ed Horvath talking about the young coaches at the tournament.

“I started coaching when I was recovering from an injury. I loved the game and didn’t want to be away from it, but I couldn’t play,” said Danielle Bakke, who has been coaching for six years now.

“I love the game of ringette. I love volunteering, meeting people, and I loved coaching,” said Lonnie Krahn, a long time volunteer with the sport.

“I look forward to meeting new volunteers and referees, renewing acquaintances from years gone by and driving referees from rink to rink to hotel 16 hours a day Friday, Saturday, and Sunday,” said Krahn.

Laura Webb has been involved with the sport since 1980 when she moved to Calgary. She has held 11 positions over the years that she has been involved in ringette from a ref, a coach, to a chairperson, administration, all the way to publicity and just about anything in-between.

“I enjoy the many friends I have made as a volunteer and the feeling of satisfaction. I always look forward to playing a bunny game,” said Webb.

Chris Belan who started as a coach in 1993 is still involved even though his one daughter isn’t playing anymore. He has been a competitive level coach for the past 15 years, coaching for the Canadian Ringette Championships, Alberta Winter Games, Canada Winter Games, and the Junior (U21) National Team. Belan has also been President of Ringette Calgary as well as directing of coaching. Currently he is the Advanced Learning Facilitator for Alberta, and he has also been an on-ice official for 15 years.

“I look forward to the games themselves as well as renewing acquaintances with coaches and former players that will be in attendance,” said Belan.